I've been on a knitting craze lately, making small things out of the odds and ends of my stash of yarn.  Believe me, I have quite a stash.  I have a variety of leftover yarn from projects past that are begging to be used for SOMETHING.  Something useful, something cute.  A couple of years ago, I bought myself this book for my birthday ....

I've made a few things from this book, most recently, a pair of fingerless gloves for my friend Edith Cohn, to keep her hands warm as she writes (miss you, Edith!).  Sadly, I didn't take a picture of the gloves because I was so in a hurry to get them done ....  But I did take pictures of all the HATS I've made recently!  No, these patterns are not from the book above though my current hat project is (for my dear hubby). 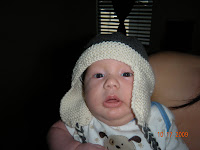 Babies inspire me to knit and when my nephew was born, my knitting needles began to fly!  I found a really easy and cute pattern for an Ear Flap Knitted Cap online, modified it a bit and knitted the hat up in a couple of days.  This is Luca, modelling it, though it's still a little big, it will fit just right by January.  It'll keep that precious head and ears nice and warm when his mother takes him on her daily walks around their neighborhood. 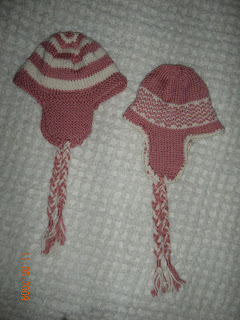 This is a pair I made for a friend at work, for his brand new baby girl, Emily.  It became a pair because I actually didn't like the way the first hat turned out (the one on the right came out curly weird along the edges) so I tried again and liked the second one better (the one on the left is made the same way I made my nephew's hat).  I ended up "blocking" the hat on the right (basically spraying the hat with water and pinning it down until dry) and giving the hat to my friend anyway.

Both pieces were fun to do because of the color work involved (the right one has fair isle knitting).  The yarn for all three hats was a pleasure to work with.  It was an ultra soft blend of Merino wool and cashmere .... just right for baby ...  :)


Here is my daughter modeling her reversible double knit hat.  The pattern can be found here.  My daughter didn't want the stripe to be very big so I continued in black.  It turned out kinda cute, huh? :) 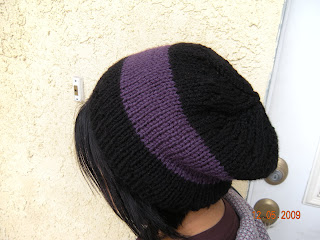 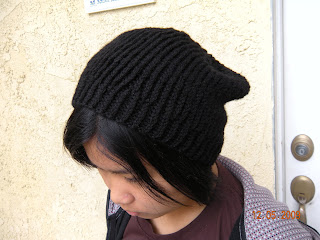 That's it for knitted projects!

On writing, I've finally found some focus for my work-in-progress and completed two new chapters!  I'm currently recovering from surgery I had last Friday so I'm hoping to catch some writing time while I heal.  Gotta keep the creative flow going. :)

Marie
Los Angeles, California, United States
I am a writer of young adult novels, a scientist, a proud mother of two college kids and the wife of a really awesome guy. I also love to knit. It's a great remedy for writer's block. :) I am represented by Paula Munier of Talcott Notch Literary.